(ERDN Session at the EAAE 2021 Congress)

European agricultural policies have now consolidated their path of departure from market intervention measures towards a combination of mandatory and voluntary aid, linked to the characteristics of companies, territories, environmental performance and the ability to offer ecosystem services (Langrell et al., 2013). Consequently, the impacts of policy measures depend on the specific characteristics of the farming systems and the territories in which farm and off-farm businesses operate. So getting insights on a disaggregated and spatial scale becomes relevant for both politicians and researchers; as a consequence, agricultural policy analysis is receiving more attention (Kremmydas, et. al. 2018). The ability of policymakers to ‚read’ and understand the territory and to know how to adapt development support tools for businesses and rural areas have now become one of the main conditions for the development of rural areas.
Moreover, the demand for good practices of evaluation has constantly grown in the last decade to acquire knowledge and skills for the definition of valid strategic guidelines aimed at effective and efficient implementation of the implementation measures. The modern evaluation, therefore, guides the action starting from the review of the changes in the current situation, and its practical aim should materialize in the use intended as „every application of a process, a product or a result of an evaluation that produces an effect” (Johnson et al., 2009). Thus, we observe an increasing convergence of economic policy evaluation with the new research methods, intending to create primary knowledge. For researchers, this is an exciting interface between science and practice, and for policy-makers a valuable source of evidence for their actions.
Also, further reflection is needed on the link between policy outcomes and the foundations of the policy-making process, so that the involvement of local actors, especially excluded groups, farmers, youth, is taken into account more than before. The different aspects of the bottom-up approach are the motivation to invite to this panel the researchers representing different regions of Europe and research interests.
In this session, we would like to confront our experience in studying and evaluating rural policy from a bottom-up perspective, in which local communities and organisations play a key role in maintaining the vitality of territories and the quality of socio-economic life. The 4 papers represent 3 different regions of Europe: Central-Eastern, South-Western and Western Balkans. All of them include an analysis of the processes accompanying policy-making in the name of the principle of good governance, with the proper embedding of problems in the local context. Given this, the results of evaluations and the methodology for carrying them out in a local and regional context are analysed. Besides, we have 3 different institutional and environmental conditions, representing a country in the West-South and Central-East of the European Union territory, as well as a country that is not a member of the EU but bases its policy-making processes on EU models. Also, the cognitive perspective is extended by inviting two professors representing local, social and economic approaches in different geographical contexts to participate in the panel as discussants.
The aim of the panel is also to present the problems of rural policy programming from the perspective of various actors, starting from the analysis of the effects of public policy on the functioning of farms (in Kosovo); environmental and economic performance of businesses (the Puglia region in Italy) and with particular emphasis on the involvement of local actors, as is the case with the LEADER Local Action Groups and rural communities (in Poland and Italy).

This session is organised by the community of European Rural Development Network (ERDN, www.erdn.eu). ERDN, established in 2002, represents a ‘critical mass’ of high-quality research expertise covering a broad range of disciplines including (but not only) agricultural production and competitiveness, environmental resource management, agri-food supply chain management, markets and marketing, international trade, econometrics, rural economic geography, rural economy and sociology. The Network is meant to encompass the leading research centres studying rural development in Europe, and in particular in its central, eastern and south-eastern countries (both EU and non-EU Members).

The impact of Rural Development Programs on the environmental and economic performance of businesses: evidence from an ex-post evaluation in the Puglia region

In the field of agricultural and rural policies, the demand for evaluation has steadily grown to acquire knowledge and skills for the definition of valid strategic guidelines aimed at effective and efficient implementation of implementation measures. The contribution aims to assess the environmental and economic impacts resulting from the provision of aid under the second pillar of the Common Agricultural Policy in favour of agricultural activities and rural areas, and, in particular, concerning Axis I of the Rural Development Program 2007-2013 of the Puglia Region. The applied method is non-experimental and is based on the integration between Propensity Score Matching model and Difference in Difference estimator, to be able to take into account both the potential heterogeneity of the initial conditions of the companies and the potential effects on the response variable that is not strictly connected to the policies in question. The results, diversified by size and type of farm, show that the environmental and economic performance of the recipient companies is not always higher than those of the not recipient ones. Furthermore, in several cases, the environmental and income indicators considered are not statistically different between the two groups.

The assessment of effects of agricultural and rural development programme: the case of Kosovo

Agriculture has traditionally played a significant role in the Kosovo economy. The contribution of the agricultural sector to GDP and employment is similar to the countries in the region but higher than in the OECD and EU member states. Although, over the years, the contribution rate of this sector is declining. This paper provides an overview of the agriculture and rural development policies in Kosovo and analyses the impact of budgetary support measures of the agriculture and rural development program during 2014-2017. A total of 2500 farmers were surveyed during autumn 2018 (in the context of an FSS funded project) and represent different categories of subsidy/grant, direct/indirect beneficiaries and also those, not benefiting from public support. To have a comprehensive sample, all municipalities were weighed against the total number of farms that each analysed region. This helped to properly set the research sample. Farmers who have been selected to be interviewed for FSS survey 2014-2017. The statistical analyses of the data will us to draw hypothesis related to increasing of production, substitute import, job creation, and increase share of market-oriented farms, increase commercialization, revenues or vice versa.

In the paper, we analyse the streams of funding in rural and regional policy in Poland. The research showed that it was primarily the regional programme that translated into the development of non-agricultural functions of rural areas, whereas rural development programme largely supported areas where agriculture, expressed by the share of agricultural land in the county’s area, played a major role. We demonstrate that activities under the LEADER well contributed to the creation of new enterprises in rural areas. This is a measure that proved their role in shaping local cooperation in the field of good governance, which is conducive to undertaking dialogue between local governments (administration) and representatives of inhabitants, social organisations and entrepreneurs, and at the same time articulating local needs. In this context, it has been proved that the approach to shaping local development strategies is important for the development of entrepreneurship.

The considerations were supported by the analysis of several dozen of projects submitted under the calls for proposals in Local Action Groups by existing and future local entrepreneurs. We use the case study in the selected LAG. The results indicate the nature and level of innovativeness at the local level.

The role of the LAG as a bottom-up programming tool has seen its role as an operational arm of regional policies increase significantly in recent years. This link between instrument and territory should correspond to a very strong adherence between local LAG strategies and characteristics and needs expressed by the reference stakeholders. The aim of this work is, therefore, to evaluate how local development strategies correspond to the needs and characteristics of the territories. The idea is to identify and study the connection of randomness that exists between the structure of the current financing plan of the LAGs examined and those that are the context characteristics of the reference territories. From a methodological point of view, a meta-analysis of the financial plans of the Apulian LAGs will be carried out, defining the main areas of intervention. Consistency between the resources allocated and the result and product indicators indicated in the OSH will be taken into consideration. The second step will concern the study of this randomness through a regression model which, as a reference, will consider the current funding identified by the LAGs for each sector and, as dependent variables, the context indicators that will be identified.

Open call for papers on rural policy to Special Issue of Energies!
Discount for Authors available up to 50% – ask Editors (Paweł Chmieliński:): 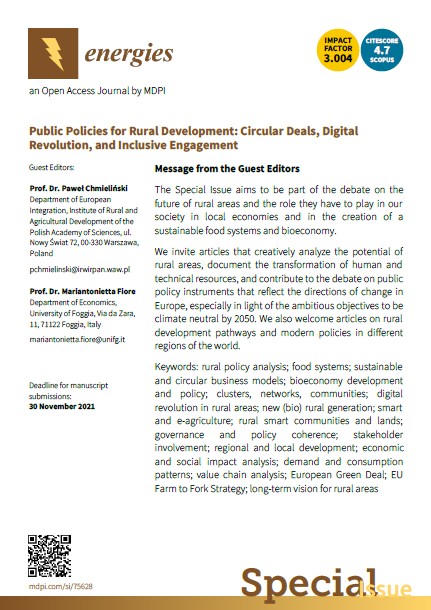