The meeting will be held via Microsoft Teams. Participation in the Bioeconomy Innovation Week is free and open to everybody, you can find the link for registration below. For more details, please download the agenda below.

Here you can register for the Bioeconomy Innovation Week.

ERDN and BIOEASTsUP project will be presenting their activities during this event:

Session I: The potential of the bioeconomies in the CEE countries in light of the new CAP, the European Green Deal, and the COVID-19 pandemic
9:30 – 9:45: Introduction of the BIOEAST Initiative, speaker: Barna Kovács, BIOEAST Secretary General

Session II: The development level of bioeconomies in Central and Eastern European countries
11:55 – 12:15: The current state of the bioeconomy and the related sectors in the BIOEAST countries, speakers: Markus Lier and Biljana Kulišić, Task leaders, BIOEASTsUP Project
12:15 – 12:35: How could the CEE countries and/or their regions measure the development and/or success of their bioeconomies, speaker: Martin Banse, Director, Thünen Institute of Market Analysis

DOWNLOAD THE FULL AGENDA OF THE BIOECONOMY INNOVATION WEEK
The POWER4BIO project aims at increasing the capacity of regional and local policy makers and stakeholders to structure their bioeconomy and to support the emergence of a thriving bio‐based sector. Adequate knowledge and best practice exchange and networking within and among regions, across the EU.
ERDN is supporting this project and Paweł Chmieliński of ERDN is a Member of the Advisory Board of the POWER4BIO project.
Check the site of the POWER4BIO: https://power4bio.eu/ for more valuable outputs of the project! 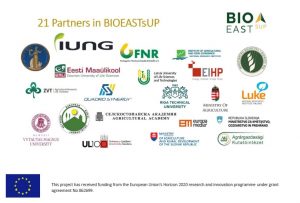