The MAP members found it very surprising that despite diversity of rural areas in the European Union and their different level of socio-economic development the MAPs identified similar needs and issues that must be tackled to make the EU rural areas attractive territories for living and working.

The figure below shows the percentage of MAPs mentioning in their position papers the five most popular characteristics of visions. The green bars show the characteristics that were also indicated by the Polish MAP Zielone Sąsiedztwo. The only top-5 issue that was not mentioned in Poland was sustainable and stable demographic structure. However, during a discussion the MAP members agreed that this issue is also vital for rural areas in Mazowieckie region, Poland. 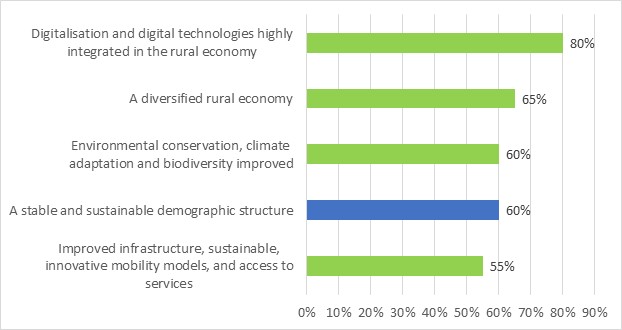 More about SHERPA Long-term rural vision you may find here:

MULTI-ACTOR PERSPECTIVE ON THE FUTURE OF RURAL AREAS

And the Polish MAP Paper is available here:  the future vision of rural areas

Sustainable Hub to Engage into Rural Policies with Actors (SHERPA) is a four-year project (2019-2023) with 17 partners funded by the Horizon 2020 programme. SHERPA has received funding from the European Union’s Horizon 2020 Research and Innovation Programme under Grant Agreement No. 862448.